Bhutan  is a small country in the Himalayas between China and India.

Besides the stunning natural scenery, the enduring image of the country for most visitors is the strong sense of culture and tradition that binds the kingdom and clearly distinguishes it from its larger neighbors. Bhutan is the only Vajrayana Buddhist nation in the world, and the profound teachings of this tradition remain well preserved and exert a strong influence in all aspects of life. Due to its pristine environment and harmonious society, the tiny Kingdom of Bhutan has been called “The Last Shangrila.” 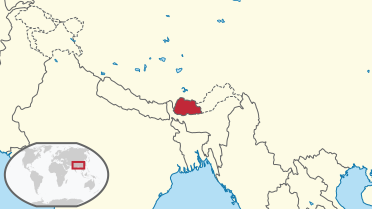 This ideology was the brain child of King Jigme Singye Wangchuck who, having gained a modern education in India and the UK, realized that mere economic success did not necessarily translate into a content and happy society. Consequently, soon after his coronation in 1974, the young king began to float the idea of developing a new set of guidelines by which to govern the country. Slowly these ideas took shape, and in 1998 the GNH indicator was established. GNH stands for “Gross National Happiness” and is defined by the following four objectives: to increase economic growth and development, preserve and promote the cultural heritage, encourage sustainable use of the environment, and establish good governance. While the concept of GNH receives much international praise and is a major draw for tourists, potential visitors should be aware that the idea is very much in its incubation stage, and there is very little evidence of GNH in the country itself.

The first humans probably arrived sometime after the Ice Age, and little is known about Bhutan’s prehistory. Historical records began with the arrival of Buddhism in the 7th century, when Guru Rinpoche (Padmasambhava) visited Bhutan and established monasteries.

In 1865, Britain and Bhutan signed the Treaty of Sinchulu, under which Bhutan would receive an annual subsidy in exchange for ceding some border land. Under British influence, a monarchy was set up in 1907; three years later, a treaty was signed whereby the British agreed not to interfere in Bhutanese internal affairs and Bhutan allowed Britain to direct its foreign affairs. This role was assumed by independent India after 1947. Two years later, a formal Indo-Bhutanese accord returned the areas of Bhutan annexed by the British, formalized the annual subsidies the country received, and defined India’s responsibilities in defense and foreign relations.

In December 2006, King Jigme Singye Wangchuck transferred power to his oldest son, the Crown Prince Jigme Khesar Namgyel Wangchuck, bestowing upon him the title of the fifth Druk Gyalpo. The official coronation took place in November 2008. The Fifth King is Boston and Oxford educated and is held in high esteem throughout the country.